Positioning of the patient

TKA is always performed with the patient in the supine position.The operatingtable should be level. The rare exception occurs when TKA is being performedbelow a fused or ankylosed hip. In this case, the table is in the level position forthe exposure and closure. During the arthroplasty, the patient is placed inTrendelenburg position and the foot of the table is dropped; the uninvolved leg issupported on a separate stool or table.

Placement of the Footrest

Many surgeons prefer a commercially available cylindrical footrest that supportsthe knee in flexion during the arthroplasty. If this is not available, a satisfactorysubstitute is a towel or blanket rolled into a cylinder and taped into position. The optimal level for placement of this support is at the fattest part of the patient’scalf (Fig.1). This supports the knee in maximal flexion after satisfactoryexposure has been achieved. The level for this support therefore is independentof the preoperative range of motion but reflects the flexion that will be achievedonce the quadriceps mechanism is everted and the knee is mobilized. 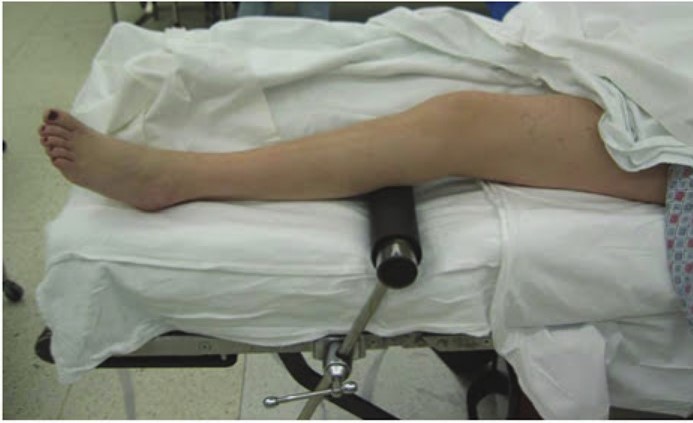 Many surgeons use a tourniquer for all TKAs, with essentially two expetions. The first is in the obese patient, especially one with a short thigh. A tourniquet is often ineffective in these patients and compromises the proximal extent of the surgical field. The second exception is in a patient with known peripheral vascular disease and absent pulses confirmed by Doppler examination. These patients always have a consultation with a vascular surgeon preoperatively. Even if bypass surgery has been successful, do not use a tourniquet. The incision and initial exposure are made with the knee in flexion, which minimizes bleeding and allows the vessels to be coagulated as they are encountered.

The tourniquet pressure is 250mm Hg in most cases. Occasionally, pressure as high as 325 mm Hg is necessary to avoid a venous tourniquet effect. Maximum tourniquet time is 90 minutes, with a 10-minute interval before reinflation is performed. Elevating the limb for 30 seconds before inflation of the tourniquet. many surgeons prefer not to exsanguinate the limb with an elastic bandage (Esmarch bandage) so that some blood remains in the superficial veins and they are casier to odentify.

The first does of prophylactic antibiotics is given at least 10 minutes before tourniquet inflation. Recently, many surgeons are using the tourniquet for only a few minutes during initial exposure and reinflate it for approximately 10 minutes for cementing.

Próxima: Biomechanics of the knee joint