Surgery of DDH of acetabulum Ⅱ

Surgery of DDH of acetabulum Ⅱ

Technique is most important in achieving success with solid acetabular bone grafts. All cartilage and soft tissue is removed from the contact areas between donor and host bone. The graft is prepared with an oscillating saw, and the acetabular bed is prepared with a curet. The fit of the graft to the host is crucial; the head is placed in the defect in its most congruous position. The graft should be positioned beneath a buttress of host bone that is capable of supporting weight bearing, and the trabeculae of the graft should be oriented in line with the weight-bearing forces. The graft is provisionally fixed with smooth Kirschner wires. Definitive fixation is achieved with two or three cancellous lag screws with washers. The screws should be oriented in parallel and along lines of weight-bearing forces. Screws must be inserted with careful interfragmentary technique, and the graft should be overdrilled to allow this if necessary. Initial shaping of the graft is done with a high-speed burr. Final shaping of the graft and remaining host acetabulum is done with hemispherical reamers. Caution must be exercised during reaming to avoid excessive torque on the graft. For this reason, we prefer to prepare and ream the graft before definitive screw fixation (Fig. 3-75). In this way, the final sites for screw fixation are selected after the graft has been prepared and are not compromised during the reaming process. Final shaping of thelateral aspect of the graft also can be done at this point with a trial acetabular component in place before final screw fixation.If a portion of the graft is left prominent beyond the lateral edge of the cup, the unstressed portion likely will beresorbed over time (Fig. 3-76). 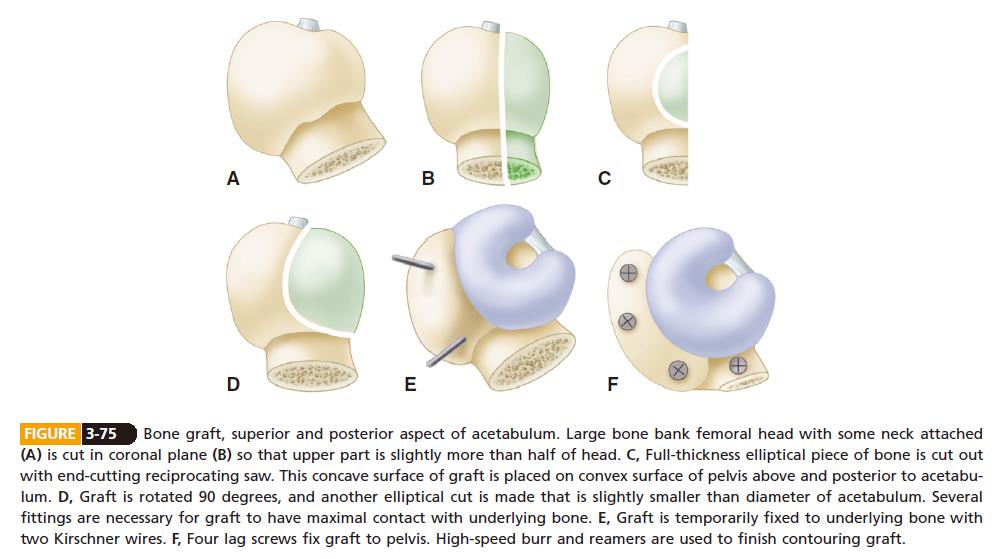 The rate of union and resorption and the long-term viability of acetabular grafts are concerns. Sanzén et al. found no incorporation of cortical bone grafts. Limited resorption of the lateral aspect of the graft occurred in 20 of 32 hips, but resorption involving bone supporting the socket occurred in only three hips (see Fig. 3-76). Radioisotope scanning did not correlate with bone resorption, nonunion, or loss of bone structure. In most reported cases of acetabular loosening after bulk acetabular bone grafting, the graft was viable and revision was accomplished without the need for additional bone grafting. 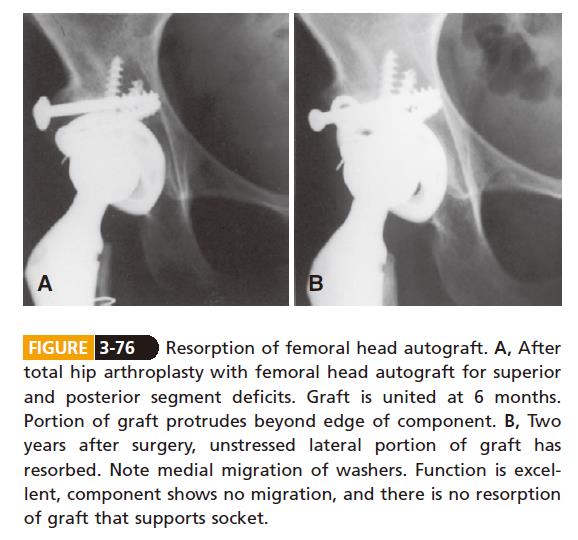 There is no potential for bone ingrowth from bulk acetabular grafts. The amount of the component that must be placed in contact with viable host bone for long-term stability remains to be determined. This problem and the failure of large bulk grafts led Harris to advocate placement of a small, porous acetabular component at a superiorly displaced position. Isolated superior displacement or superomedial displacement results in only limited increase in joint contact forces. In reconstructing a hip with a so-called high hip center, a larger amount of the porous surface can be placed against viable host bone. When a small socket is placed in a superior and medial position, however, femoral-pelvic impingement and instability become problems. Resection of a large amount of bone from the anterior column adjacent to the superior pubic ramus and from the ischium often isrequired to allow motion and reduce the risk of dislocation.

With a high dislocation, as in Crowe type IV, the acetabulum is hypoplastic, but its superior rim has not beeneroded by the femoral head. The reconstruction usually can be done with a conventional, albeit very small acetabular component placed within the true acetabulum and without structural bone grafting. When the hip is initially exposed,the femoral head is dislocated from a false acetabulum and the site of the true acetabulum may not be immediately apparent. A ledge of bone usually separates the true acetabulum from the false one, and it should be used as a landmark from which dissection is carried inferiorly. The transverse acetabular ligament usually can be located along with the cotyloid fossa, retaining some atrophic fat from the pulvinar.A retractor placed inferior to the transverse ligament and into the obturator foramen ensures that the dissection has been carried far enough inferior to place the component in the true acetabulum. The depth of the acetabulum often is deceptive because it is filled with bone. Removal of the pulvinar exposes the depth of the cotyloid fossa and the medial wall of the acetabulum, allowing the surgeon to determine the amount of medialization that can be safely accomplished by reaming. If the cotyloid fossa is not apparent, a hole can be drilled and a depth gauge used to determine the thickness of the available bone. The anterior wall of the acetabulum often is thin and can be penetrated easily, but the posterior wall usually is adequately thick. When enlargement of the acetabulum from anterior to posterior is necessary, more bone is resected from the posterior wall than from the anterior wall. Any reaming must be done with care so as not to compromise the edges of the acetabulum or penetrate the medial wall. The bone is often very soft, and the final reamers may be used in reverse to enlarge the acetabulum by impactionrather than removal of bone.

Previa: Surgery of DDH of femur

Próxima: Surgery of DDH of acetabulum