Surgery of DDH of femur

Surgery of DDH of femur

When the center of the acetabulum has changed little,as with Crowe type I and type II dysplasias, femoral length is not problematic and the femoral reconstruction generally is straightforward. Small-diameter cemented or cementless stems generally are satisfactory. The femoral component must be placed in neutral or slight anteversion in relation to the axis of the knee joint. Marked anteversion of the femoral neck can be misleading when positioning the femoral component, and anterior instability may occur, particularly if the acetabular component has been placed in additional anteversion. Excessive femoral anteversion can be corrected with a modular cementless femoral component that can be rotated into any degree of version. This does not correct the posterior displacement of the greater trochanter, however, which may cause impingement in external rotation.

For Crowe type III and type IV hips, femoral length is more problematic. When the prosthetic socket has been placed in the true acetabulum, the femur must be translated distally several centimeters to reduce the prosthetic femoral head into the acetabulum. Often the tissues most limiting this distal translation are the hamstrings and rectus femoris rather than the abductors. In such cases, a femoral shortening osteotomy allows reduction of the femoral head into the true acetabulum without extensive soft tissue release. Osteotomy of the greater trochanter and resection of 2 to 3 cm from the proximal femoral metaphysis may be necessary to permit reduction of the joint without causing undue tension on the sciatic nerve or fracture of the femoral shaft (Fig. 3-77). The bone should be resected 0.5 cm at a time, and trial reductions are repeated until enough shortening is obtained to reduce the hip without undue soft tissue tension. The narrow canal and the resection of the metaphyseal flare of the femur often require the use of a component with a small, straight stem to ensure a proper fit and to allow space for an adequate cement mantle. 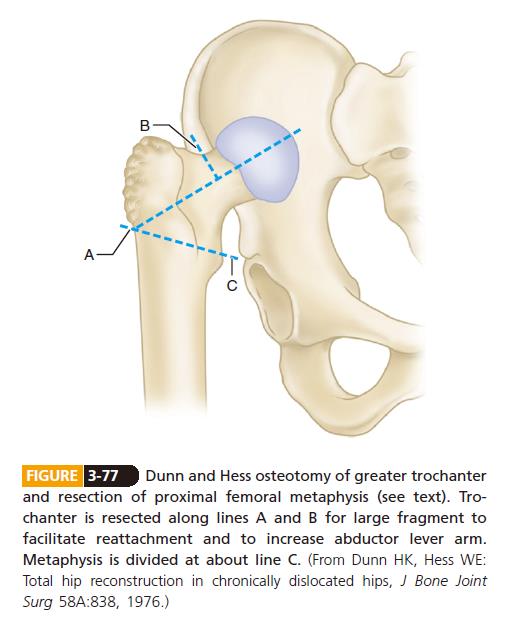 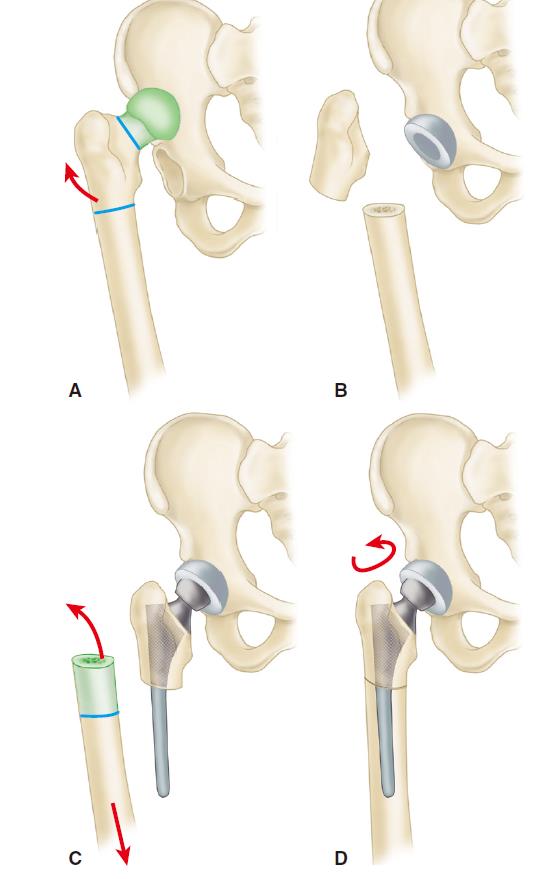